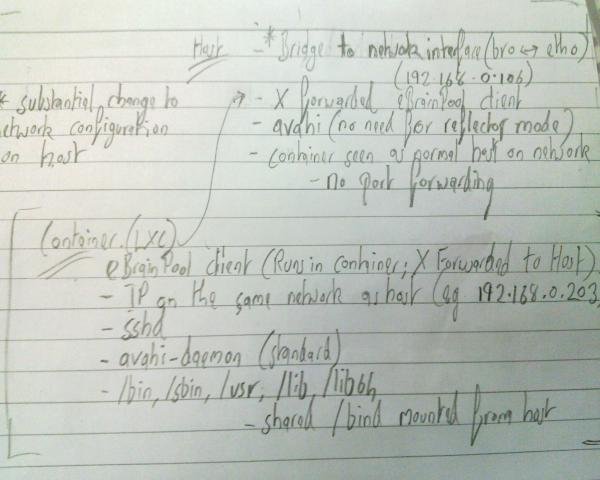 I've been toying with Linux Containers (LXC) to provide a sandbox for eBrainPool. Design objectives of the eBrainPool system with regards to sandboxing can be roughly jotted down as :

I have doodled on a few sandbox designs trying to determine which most successfully meets the above objectives. I shall present these and discuss the merits / demerits of each of these designs both to crystalize my own thoughts and hopefully gather information on any other design or factor I may not have considered.

The container is placed on the same network segment as the host via a bridge - for e.g. if eth0 is the network interface on the host of interest to us then we create a bridge and add eth0 to it. The container then gets it's IP statically or dynamically and is seen as another host on the main system.

This requires a change on the host's networking subsystem - creating the bridge and adding the network interface to that bridge. This most likely will be non-trivial and may not be possible to blindly automate. It could possibly need changes on other configurations on the host for these to work properly. It also needs root access to setup and any time we wish to have eBrainPool listen on a different network interface say the WiFi or Bluetooth interfaces a setup of the bridge for this interface needs to take place.

In short this requires complex and substantial changes to the host. It meets all of our other objectives but the last - however this maybe the most crucial objective of them all - simplicity, that's what we want in the end for a user. Changes required by this design can potentially bring to a halt a perfectly well running system and so is a no-go.